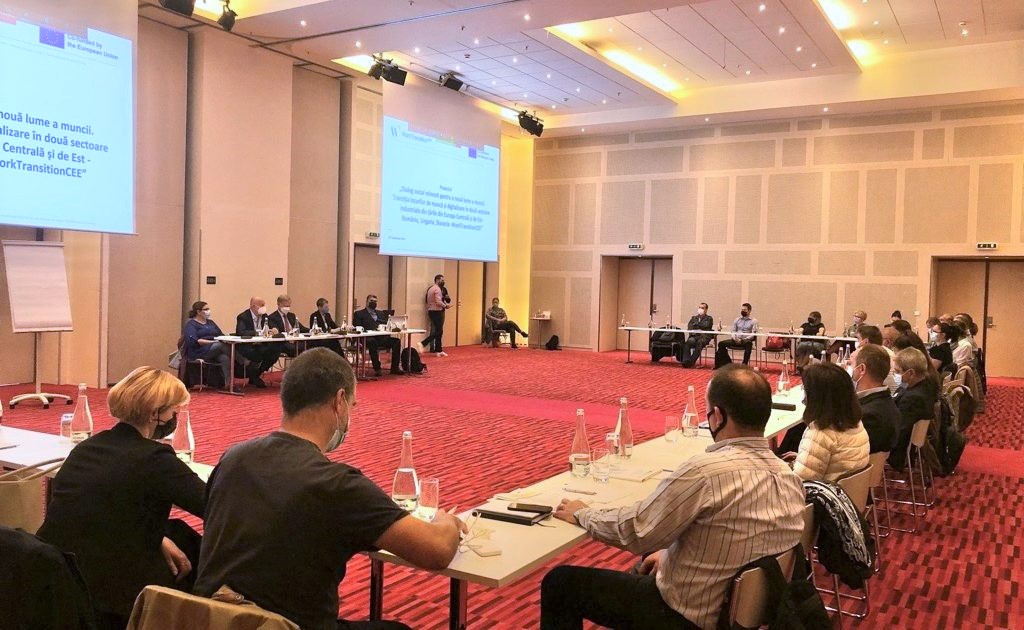 Digitization based on strong social dialog.

Bucharest, 29th September, 2021 – Trade unions, employers and representatives of the national authorities initiated the official discussions on the topic work transition in the new world of work based on equity and productivity at the seminar “Framework Agreement of the European social partners on digitalisation and its perspectives for social dialogue at national level”, organized by the National Trade Union Bloc (BNS), as part of the European co-funded project WorkTransitionCEE.

For the first time in Romania, through a coherent and structured approach, the social partners discussed the Framework Agreement on Digitization, a shared commitment of the European cross-sectoral social partners to optimise the benefits and deal with the challenges of digitalisation in the world of work.

The event was attended by social partners – trade unions and employers organisations, representatives of the national authorities with responsibilities related to the labor market, social dialogue, employment, education and training and created the context for reflection and analysis of the digital transformation of the economy and its implications for the labor market.

“We need to trust each other, share experiences and discuss the risks and opportunities we identify, in order to build a new work architecture, one based on equity and productivity. None of us, employers or unions, has all the answers on how these transformations should be approached and judging by their complexity, neither of us can be in a favorable position without the other – employees without productive companies, companies without competent employees. Implementing the framework agreement of the European social partners on digitization can be the basis for a new social construction and we are happy to start this conversation today” said Steven van Groningen, Concordia Employers’ Confederation President.

Dumitru Costin, the president of the National Trade Union Bloc, underlined the desire of the social partners to be part of the digital transformation. “The context of digitalization should not find us in the role of passive bystanders of events that will cause extensive changes in our lives, in our professional activity, in the future of the Romanian economy and society. We need to be active, informed and involved in all these changes. Whoever does not actively position himself inside this process, but outside it and assumes the role of passive spectator, will be the first to settle the cost of these transformations, and this means poverty and social exclusion. I do not want the people I represent to thicken the ranks of vulnerable citizens in this country. And for this reason, I contribute with all my energy, with my whole team, side by side with all those who want a change for a better Romania, an improvement of the citizens living standards.”

All participants contributed in two working groups, which addressed two types of challenges. The first, Digital Competences, ensuring employment and ways of connecting and disconnecting, and the second, Artificial Intelligence and guaranteeing the principle of human control and respect for human dignity. It was a first step towards strengthening a partnership between trade unions, employers ‘organizations and public authorities to meet the objectives of ensuring professional transitions that would protect and develop workers’ careers while increasing skills and labor productivity.

The seminar is part of the WorkTransitionCEE project – a project co-financed by the European Union, which brings together six representative social partners from Central and Eastern Europe, Concordia (RO), NBS (RO), MGYOSZ / BusinessHungary (HU), VASAS (HU), RUZ (SK), NKOS (SK)) to study in detail the risks, challenges and opportunities for the labor market in context of the forth industrial revolution. WorkTransitionCEE aims to empower the social partners in Romania, Hungary and Slovakia to play a more important role in the transition to the new world of work and to strengthen the European social dialogue for the implementation of the Autonomous Framework Agreement on digitization.